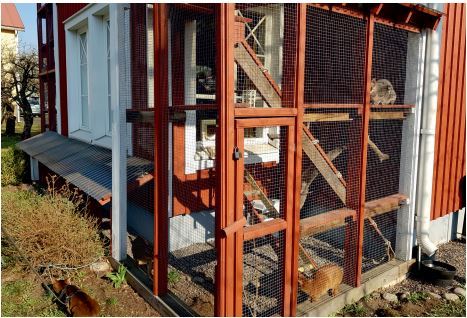 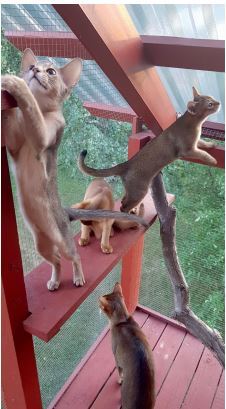 In principle, a cat does not belong to Finnish nature. A free-moving cat is a danger to the rest of nature, and to itself. However, most cats like to sniff the outdoors. Outdoors exercise can be well organized with a cat with the help of a harness, most cats get used to them well and the person walking at the end of the lead does not restrain the cat’s enthusiasm to explore and sniff their surroundings. It is easier for the servant if it is possible to build an outdoor pen for the cat or to net/glaze the balcony for outdoors use.  How can a pen be implemented in the yard? Here are Nina Sillanpää’s implementations.

I originally had two cats for which I built the first pen in the bay window of my house. As the cat herd grew, pen space was increased. The yard can be accessed from the ventilation window.  I replaced the outer window with a plexiglass window, to which I managed to attach a hatch for passage. With the inner window, the yard can be completely closed. For the foundations of the pen, I partially dug a brick plinth underground, on top of which I piled the wood that had been used on the railroad tracks I found on the plot. Pressure-impregnated wood of approx. 10x10 cm is also well suited for this. I used angle irons for the corners. For construction, I utilized the wood left over from building the house and, in addition, I bought pressure-impregnated wood for structures coming close to the ground, mainly to cover and secure the bottom of the net. I painted the wooden parts with exterior paint. Pressure-impregnated wood can well be used for the entire yard, saving on painting work.

The size of the construction boards depends a lot on how high the pen becomes and how sturdy it needs to be. I have a new part of the pen the height of the entire house, through which I can then access the netted balcony. The height felt pretty staggering, I made a partition/board floor on the balcony level of the yard, where I left an opening for passage. I used terrace screws for the fastening of the pen and it is also fastened to the outer walls with screws, so it is relatively easy to disassemble. The pen has a subsoil, some of which is crushed stone next to the plinth, and some lawn. You can put a so-called grass mat on top of crushed stone, it feels nicer under the paws. The pens are connected by a lower “siphon tube”, both parts of the pen can also be accessed from the outside and the doors have padlocks. Being in the pen is sometimes, especially on summer nights, so nice that a few times the cat has had to be fetched in from the outside.

For the net I used a rodent net, mesh size 1.5x1.5 centimetres. I wanted a small-mesh net so that there would be no birds or bigger butterflies, etc. in the pen. Unfortunately, wasps sometimes enter the pen, usually not by flying in directly, but if they sit on that net, they may also come inside. And yes, cats are entertained, but not me! A few paws have been swollen because of these visits. Worms, lizards and frog babies and some moths have been carried in from there as a great prey. The pen also has enough diagonal rain for the grass to grow. The net is sold in meter widths and in rolls of at least 10 and 20 meters. It is a good idea to place uprights in this width of the net to suit the fastening. The net was fastened to the wood with a stapler and a vertical rib attached to it with screws.

The roof is light cover. Between the uprights I have placed slightly wider boards for passage and rest. Otherwise, the pen can then be decorated to your liking. During the summer, cats like to sleep outside in the sun or in the shade in the summer heat; nests, baskets and hammocks can be placed in different places. I have a trunk of apple tree felled from the plot for climbing in the pen. Apple tree is nicely curled for that purpose.

The yard is in active use from early spring to late autumn. Especially the warm summer nights are very attractive, although I do not let the cats stay there at night when I sleep. And also not when I am not home myself. Unfortunately, there may be free cats or other animals moving in the yard, which will then cause confusion and quarrel between your own gang. Even when it is cold, they quickly visit the pen to wonder the snow. Pen alone is not always enough, our Kalevi and Siiri definitely want to go out in harnesses daily as well.

A pen has also been set up for the cats to stay at grandma’s. The pen has been made on the end wall of the house, access from the ventilation window of the living room. In it, the outer window has been replaced with a metal mosquito net and a cat hatch. Even in this pen, handsome apple tree trunks were obtained for climbing. The bird feeding point is conveniently located on a pine next to it, you can get close to lurk for prey. For the summer, the terrace still needs to be netted, it also makes it easier to hang out on the terrace. 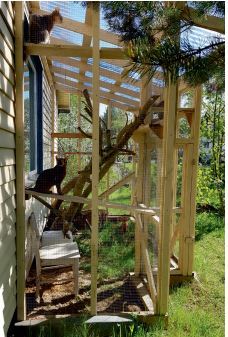 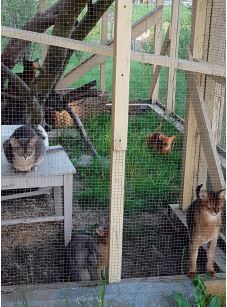