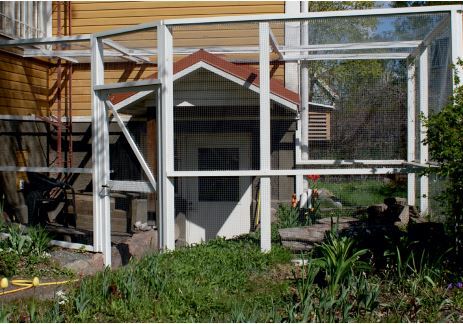 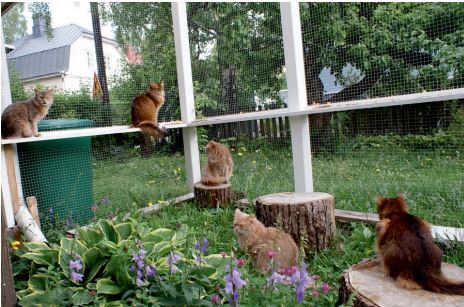 A little over two years ago, we moved from a terraced house to a detached house. When we moved into our terraced house, it already had a cat pen, which was one of the main reasons why we chose it as our home. And as we were house-hunting, one important criterion was that the house must have - in addition to the front door - another door around which we can build a cat pen. There some otherwise potential houses that we dumped because constructing a pen as part of the house would have been impossible, or at the very least, extremely difficult.

Sure, the cat pen does not absolutely have to be physically connected with the house, but utilising existing structures, such as house walls, means that there is less construction work and accessing the pen is easier for the cats.

Our own pen is built around the side door coming up from the basement. The door has a cat flap that they can use to freely access the pen. I usually close the flap for the night and when we leave the house. Although in the summer I sometimes let the cats spend their nights in the pen too. The pen hardly has many risky areas compared to the indoors, but at times cats moving around freely can bring about some trouble. On a few occasions, a fox has visited our yard and made all the cats dash madly inside.

The pen’s supporting poles are painted gluelam, 90 x 90 mm, and the netting is small-mesh, solid rodent net that will stop, for instance, birds from entering the pen - at least in principle. The pen roof is also made of netting. The pen area has a ladder that the chimney sweeper needs to access the roof, which is why we have a hatch you can open in the pen’s roof. The sides of the hatch provide a small chink through which an occasional curious great tit may find its way to the pen. Oh, the joy this causes among our felines! So far, we have managed to get every bird out alive, sometimes minus a tail feather or two.

The roof made of netting has its pros and cons. Part of the pen has a soil base, and the net roof allows rain to water the ground for us. If you ask the cats, the rain is totally unnecessary, but then again, they probably do not realise that the grass they love so much needs water to grow. In winter, snow sliding down from the roof onto the pen can sometimes cause problems, but until now we have been spared any major damage.

The other half of the pen was already a terrace, so we left it as it was. The terrace has a cabin made for the cats that we cover with a cushion when the weather is nice, and a chair where I sit when it is free. Well, mostly a cat is found in the chair.

We have used wooden logs and large branches from apple trees to decorate the soil side of the pen. Circling the whole pen, at the height of about one metre, we have a “windowsill” where the cats can sit and walk around the pen above the others. We also plan to create some sort of a climbing block and sitting levels even higher in the pen at some point.

Photos and text by Elina Koivisto